Keith Reid is a innovative oyster grower, marine engineer and past president of the British Columbia Shellfish Growers Association.

The Kusshi oyster, named after the Japanese word for “precious” or “ultimate,” is one of the most beautiful and tastiest oysters. These oysters are raised only by shellfish grower Keith Reid and his team at Stellar Bay Shellfish. This bite-sized delicacy is put on millions of dinner plates every year across North America and Asia.

The journey to growing the perfect oyster started many years ago. Working as a commercial fisherman during the 1980s, Keith was looking for something to do during the wintertime. “It just so happened that my father had this oyster lease in Deep Bay that I had worked on a little bit when I was a teenager, recalls Keith. “I was interested in buying a piece of it from him, but he essentially said it wasn’t worth very much, so he just turned it over to me.”

It wasn’t before long Keith realized there was massive potential. Farming the ocean, and shellfish farming just seemed to be a natural fit for him. “It took me three years to transition from fishing into full-time oyster growing. When I started, it was just me and my two sons on the beach picking oysters in the middle of the night. [Eventually] they went on to do other things and then it was essentially just me for a few years. Then my son, Sean, came into the business and now runs the business. From there, we’ve grown this company from essentially just me to 50-60 employees.” 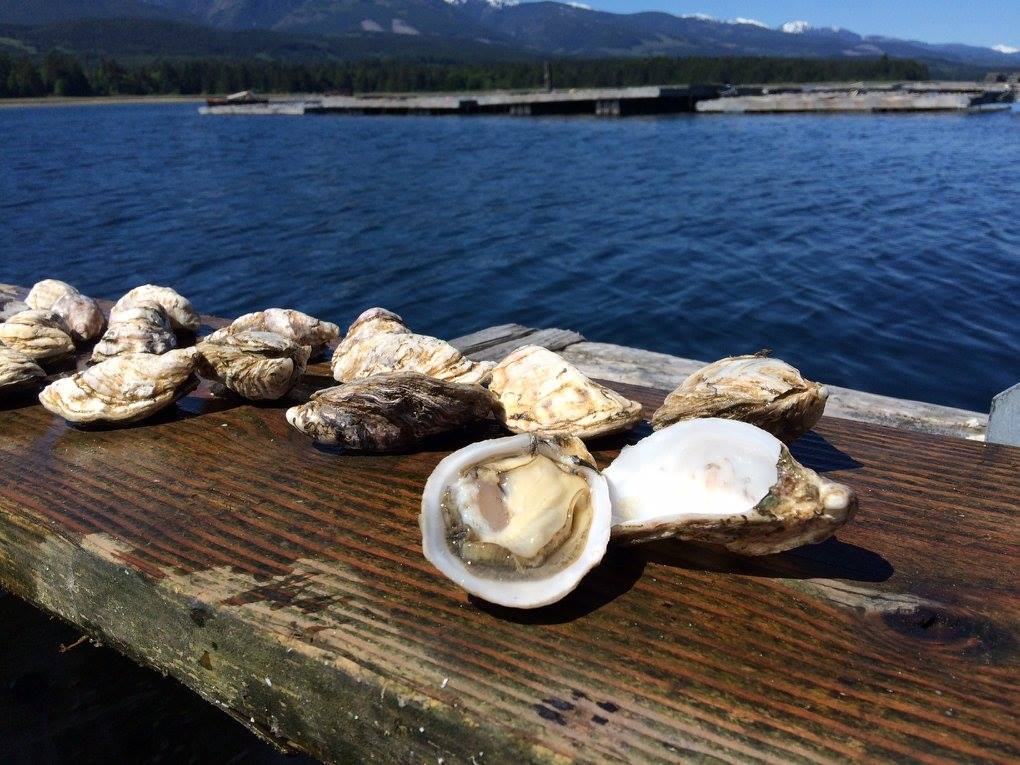 Although it takes more than water quality to grow the perfect Kusshi oyster. “It comes down to the handling of the oyster. It is very labour intensive oyster to grow. The development of the equipment that has taken us 15 years to perfect allows us to get a consistent oyster.” Years ago, Keith and his team discovered that they could achieve the perfect texture and consistency by tumbling their tray-farmed oysters in a mechanical tumbler. They advanced the tumbling process by taking it a step further and designing round, stackable trays that fit directly into the tumbler.

Oysters often have thin, brittle shells that break or shatter during transport or shucking, but not Kusshi oysters. The tumbling process smoothes any frills off and forces the oyster to deepen and thicken their shells. This produces a meatier body and tougher shell that doesn’t break during shucking. This makes them a very clean oyster when they go to market. “One of the comments we get constantly from restaurants is they like the oyster, because as far as deepwater oysters go, the shell doesn’t break [when shucked], which seems to be a problem with a lot of different oysters.”

A common misconception is that people often equate shellfish farms with the finfish aquaculture industry. The shellfish hatcheries often use bioreactors to produce live phytoplankton for feed in the nursery phase. Oysters, however, are very self-sufficient when it comes to mealtime because they are filter feeders. According to Keith, “people often believe we feed our oysters, but we don’t feed our oysters at all. The oysters eat phytoplankton that’s naturally produced by the ocean. They take that algae and turn it into protein [for nourishment].”

Stellar Bay Shellfish require a large seed supply in order to supply oysters to its markets on a year-round basis. There is no individual grower that is able to meet their demands, so Keith and his team purchase the majority of their oysters from Chile as well as every producer in the province. “To put our entire production in the hands of one hatchery wouldn’t be smart, because if that hatchery happens to have a major failure, then it’s a domino effect and all of a sudden our business is impacted. So that’s why we make sure we’re involved with every single hatchery.”

But why is there is such a problem getting seeds in Canada? According to Keith, one of the reasons there aren’t more hatcheries on the Canadian West Coast is because the energy costs. “It’s very difficult to compete with those hatcheries that are located closer to the equator and have minimal energy costs. Our energy costs here are much higher [because] our waters are very cold, [and] it takes a lot of energy to heat up the water to condition for the oysters to spawn.”

So, what advice does Keith have for start-up BC shellfish farmers? On the side of caution, he advises, “be cautious because there is a lot of bureaucracy that exists within the shellfish sector. It’s a lot of regulations and nothing moves very quickly, so a person getting into it, even to get a lease, can take a substantial amount of time.” Up-and-coming shellfish growers should do their due diligence. Research what is currently out there and what the demand is.

“On the West Coast, you have all the inherent problems of transportation. The cost of getting your product to market, [and] it’s very difficult to get people working when you’re remote on the West Coast of the Island.” Is oyster farming a sustainable venture though? Absolutely. “[Oyster farming] is seen internationally as a sustainable industry. “It’s a great business to be in because you’re growing really high-quality food and a product that’s sustainable.”

Grown in the pristine waters of Baynes Sound in the Strait of Georgia off Vancouver Island. Stellar Bay Shellfish produces oysters of outstanding quality.