A short introduction to our delicious friend, the oyster!

Around the turn of the 20th century, oyster production was peaking at an annual 160 million pounds, and so was used to feed the masses. As harbours and estuaries became more polluted with growing human impact and oyster populations were aggressively harvested, the naturally spawning oyster populations decreased and they became a delicacy. 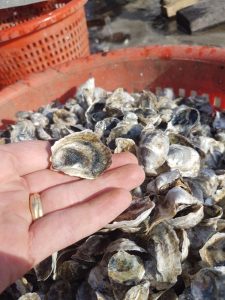 Today, the cult of oysters can be easily compared to the cult of drinking wine. There are so many flavours that one can easily feel lost. One company, Pangea Shellfish, even put together a tasting wheel, similar to a sommelier’s tasting wheel. Plus, there nearly as many “types” of oysters as there are bays along the coasts. It can be a real challenge which type you prefer. Let’s first try to solve the eternal question “what’s the difference between East and West Coast oysters?”

The true difference between the Coasts are the species cultured: East Coast basically only grows their native Eastern/Virginica oyster (Crassostrea virginica), while the west coast grows predominantly the Pacific Oyster (Crassostrea gigas) originally from Japan, but also grows the Olympia (Ostrea lurida, native to Olympia Washington), Kumamoto (Crassostrea sikamea), and even Virginicas from the East Coast. It should be mentioned that there are 3 other commonly grown species for consumption: the European Flat (Ostrea edulis), the New Zealand Flat (Ostrea chilensis) and the Sydney Rock Oyster (Saccostrea glomerata).

As oysters grow, their mantle builds the shell and depending on the environmental conditions, their shape can be drastically changed. Naturally, the shape of West Coast oysters will tend to have rougher jagged edges with ridges and points on the shell and will often develop a  deeper cup, which is often enhanced by wave action or tumbling. When an oyster is in a very dynamic and energetic environment (like a regularly tumbled bag, or a wave exposed point) its mantle will be constantly abraded and this will force the oyster shell grow deeper and thicker which in turn develops a meatier, denser oyster.

One company Stellar Bay Shellfish has a labor intenstive proprietary process to make an oyster we’re especially big fans of at Industrial Plankton, named the Kusshi, which is Japanese for “ultimate”. The delicious Kusshi oyster is regularly tumbled and therefore these are some of the meatiest freshest oysters available on the West Coast of BC. East Coast oysters are normally farmed in a mud or sand substrate which is more calm naturally and thus the oyster tend to develop outwards more without constant action on the mantle and shell. Also, East Coast oysters have a greater variety of colors – blond, green, black or even pink.  Although, all oysters from West and East Coast look different, good news is that they are all cleaned, opened and served the same way.

Oysters feed on suspended particles in the water column called plankton. They filter water through their gills to feed on suspended algae. Because of this, their taste varies a lot depending on where they grow. This has lead to an industry of marketing their unique taste and even branding them based on the body of water they are grown in. Comparatively, West Coast oysters tend to have plumper meat, while East coast oysters (because they’ve grown more laterally) tend to have a more classic oyster texture, though, there are so many varieties of oyster on both Coasts that generalities, tend to fall short. 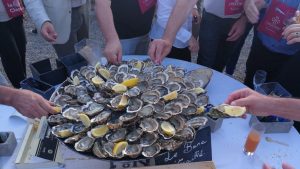 Merrior is very important to an oyster’s taste, and is to an oyster what terrior is to wine. It is the lasting impression that the landscape, or in this case seascape, has given to the oyster to shape its flavor. The salinity of the water (influenced by rain), season of consumption, composition of the seafloor (imparts minerality), currents, tides, algae consumed all influence an oyster’s flavour and texture. Therefore, with no two bays being identical it leads to a myriad of oysters to try. France has premium oysters from the Marennes-Oléron region that are finished in a special controlled salt ponds, “claires,” which sometimes has microalgae added that contributes to a fruity taste. 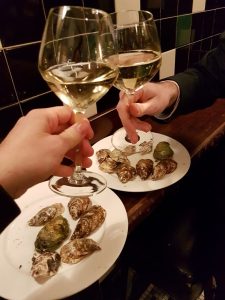 For a long time Champagne was the choice to be made with seafood. Although, today’s tastes are more broad, and you can choose any drink with your oysters. If they’re going to be variable in taste, why not  adapt your drinks too. Generally, many popular drinks are great with oysters, provided they enhance the flavors, and not overpower them. These are just a few of our favorites:

Both coasts offer huge variety of oysters, but the key to a great oyster is freshness. East-Coasters will say theirs are the best and vise versa for West-Coasters, but they’re both right. Unquestionably, the best oyster we’ve had on either coast have been straight from the producer right out of the water. In any case, there is nothing quite like eating an oyster straight from the water/beach!

Though oysters will “safely-last” up to 30 days refrigerated, oysters are still alive during that time, and slowly use their own energy reserves. This energy reserve is their fat, containing Omega-3s, which come from from phytoplankton. This is what makes them delicious, which, when reduced, leads to flimsy textured, fishy tasting oysters. In summary, if you take anything away from all this at all, eat oysters fresh and support your local growers. Another key point, oysters are an incredibly sustainable protein and it improves the oceans they come from, to boot. Hilborne et al (frontiers of ecology,  2018) showed that aquacultured mollusks (OYSTERS!) and small pelagic fisheries were some of the lowest impact on our planet.

Here is a list of just a few types that we enjoy. If you’re thinking of doing an oyster tour of Vancouver Island, BC, certainly come by Industrial Plankton Inc. From here we’ll send you on your way with some good recommendations for oyster bars, and oysters to try. Many of these oysters start their lives fed with algae from our photobioreactors.

Our Biologists recommendations from his years working in an oyster bar:

In summary, hopefully you enjoyed our introduction to oysters. Please let us know what your favourite oyster is!