Go Back
What are open and closed algae culture systems?

The two broadest methods of culturing algae at medium to large scale are split into two styles of system: open and closed photobioreactors (PBRs). A PBR is any device or system that supports the culture of photosynthetic organisms using light. There are photobioreactor advantages and disadvantages to all types systems depending on the goals you have for culturing your algae.

In any type of algae production light penetration,  light path and surface area to volume ratio all affect the density that can be achieved and overall productivity (algae produced) of the system:

By definition these systems are open and expose the algae culture in them to the “outside world”. Open culture systems tend to be lower cost than closed, but they have minimal control over the culture environment (temperature, light, pH, etc.). They generally culture algae at lower densities than closed systems, require more space to be economical, and are more prone to contamination.

Ambient air, rain, ocean spray, staff, and even wild animals can all be vectors for contaminants in open systems. Common contaminants like  algal predators (zooplankton), bacteria, and even competing strains can all reduce production efficiency or even spoil cultures. This leads most open culture systems to be operated in various forms of batch production(where algae is grown over a short period of time and it can out-compete the inherent contaminants until it is harvested completely.

Raceways ponds, fiberglass tanks, and artificial or earthen ponds are all examples of open cultures. Being generally larger and simpler systems, they tend to be much cheaper to set up proportional to volume, however the densities achieved are often lower with higher levels of contaminants leading to large land requirements. 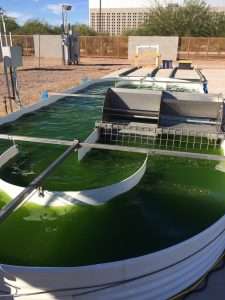 Raceways ponds use short walls and paddle wheels to move a shallow pool of algae around a oval route. The culture depth is usually limited to about 1 ft (30 cm)to allow the sun to illuminate it efficiently. They require large swaths of land because of their low water height, but can be very cost effective when operated well.  Open raceway ponds saw widespread adoption during the algae-biofuel boom in the early 2000s. They are open systems and prone to contamination, so whatever you’re doing downstream with the algae needs to be tolerant to some level of contamination, not to mention due to their large volume they require large volumes of clean inoculum.

Fiberglass tanks (kawall tubes) are usually cylindrical and aerated from the bottom to create the mixing and gas exchange necessary for algae cultures. By using clear fiberglass the sidewalls in addition to the top surface can be illuminated for photosynthesis.  They tend to be taller than they are wide, but almost all are much deeper than raceway ponds and have lower surface area-to-volume ratios due to increased water height. This limits their density. 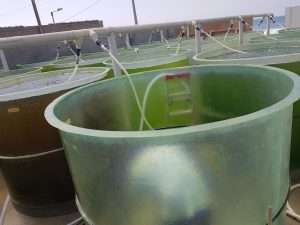 Sizes can range from tens of liters to tens of thousands. Due to the low cost of materials and their simplicity, open fibreglass tank culture are widely used in aquaculture, particularly in regions where labour is cheap, as these tanks require lots of labor to maintain ( filled, inoculated, emptied and cleaned on a 3-4 day cycle).

If they are well managed and inoculated with a good inoculum culture, batch production in fiberglass tanks can provide lots of algae, albeit with a fair bit of effort and space at a low cost.

Artificial ponds are very similar to fiberglass tanks, but are made with opaque side walls or are dug into the ground. This allows for cheaper construction but limits the illuminated surface area. Because of this, they tend toward squatter tanks (like raceway ponds). They can use pond liners, concrete, or simply with a hole in the ground. They are often very labor intensive and require lots of chemicals to clean to operate properly.

Overall open algae culture systems run for shorter periods as they generally cannot run continuously; however, when expertly operated they can be very cost effective solutions for algae production at large scale.

In a frustule (sorry – diatom pun), closed algae systems are ones where inputs are controlled and algae is grown in an enclosed environment. There are many varieties of closed photobioreactors (PBR).  Many of the vital parameters important to algae can only be controlled in closed systems. Closed PBRs can use artificial or natural light and are generally more initially expensive than open systems, but being closed, they can operate for varying lengths of time continuously.

In a frustule (sorry – diatom pun), closed algae systems are ones where inputs are controlled and algae is grown in an enclosed environment. There are many varieties of closed photobioreactors (PBR).  Many of the vital parameters important to algae can only be controlled in closed systems. Closed PBRs can use artificial or natural light and are generally more expensive initially than open systems, but being closed, they can operate at varying levels continuously. 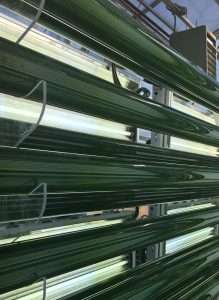 Tubular photobioreactors are made of a series of narrow diameter (2-8 in) transparent tubes connected to a reservoir and a pump that circulates the media (nutrients and water) and algae. They are most cost-effectively lit with natural sunlight, but can also use artificial lighting when natural light is limiting.  Because the light path is so short, they can achieve high-density cultures, and because of this they have become very popular for mass algae cultivation in the nutraceutical and biotech sectors where bioproducts from algae need to be dewatered and the product needs to be more pure for the end application.

These systems can span acres and have an incredibly high surface area to volume ratio. This makes for a lot of area to clean. They often utilize pigging (conceptually pumping a scrub brush through a pipe) to remove biofilm from the tubing, and large volumes of chemicals to clean between cultures. They have limited temperature control unless installed in an air conditioned building or equipped with coolant jackets.

Plastic Bag Photobioreactors are usually cheaper than the other closed systems in upfront capital cost. The bags don’t have a structure of their own, so they usually require a wire mesh to support the bag or a frame to hang them from.  There is generally no temperature control, so they are also limited in where they can operate. The bags generally come gamma irradiated or clean just by virtue of how the bag is manufactured. This allows for a clean environment to culture algae in; however the media entering must be properly treated otherwise the culture will quickly get contaminated at which point, the bags need to be thrown away. Generally, these systems rely on pasteurizers to treat the incoming water which are very energy intensive. ag systems are delicate and that can easily develop holes or tears around fitting penetrations or where bags are folded, or sealed. They generally require skilled operators to get optimal production. Their densities are limited by their surface-to-volume ratio which leads to many different various shapes and sizes of bags being used.  Generally, this leads to a high number of replicates meaning more floor space and labour.

These are generally constructed from either glass or transparent plastic that laminate a thin (~3-8 in) layer of media and algae that is aerated from the bottom. They have a very short light path like tubular bioreactors, and have more challenging surfaces to clean, due to the geometry of them, but they can also have dead zone of low circulation quite easily. 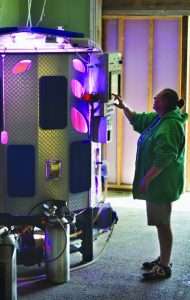 Internally lit PBRs are conceptually the opposite to tubular PBRs. Instead of putting small tubes of algae through lit areas, they put small intrusions of light though large algae volumes. They can have clear side walls or opaque, but most internally lit PBRs will aerate the algae cultures from the bottom. Because of the mixing and lit surface area to volume ratio, these PBRs are able to achieve densities 10-20 times greater than traditional bag or batch systems. And like tubular PBRs, the high surface area to volume ratio, created from the intrusions of light also create lots of area for cleaning.


The intrusion of lights in internally lit PBRs can be a nuisance unless equipped with an internal Clean-in-place (CIP) system. Because of the central volume of algae these systems can easily make use of heat exchangers to automatically control culture temperatures. This allows for a wider range of acceptable ambient temperatures the PBR is installed in as well as a wider range of possible culture temperatures. Like other closed PBRs there is a higher capital investment, but with the high density continuous culture these PBRs pay back that capital investment labour savings, lowered operational cost and higher biosecurity. This leads to countless downstream benefits.

What to consider when assessing what is right for you

With this in mind, here are some starter questions to ask yourself when choosing a system right for your goals:

The algae experts at Industrial Plankton would love to discuss your objectives and help you find a solution to meet your needs. Let’s talk!